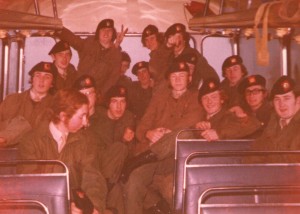 My notes on these photos gives the date as 19th/20th October 1974 for an overnight in The Glen of Imaal. I have no recollection of any training we did, but I do recall the night out in the The Glen Inn on Saturday. B Coy travelled in luxury by CIE coach and the sing-song on the bus included such old favourites as “An engineer told me…” and “Three German officers…”, as well as some new ones like Brendan Grace’s “The Boot Boy song”.

It was pretty cold when we got to Coolmoney and the first priority was to get the pot bellied stoves going. The one in our billet got so hot it was glowing red, no wonder the fire picket was so strict in the Glen.

Looking back on some of the photos from this distance there does seem to be a certain intimacy of “All boys together”. While not having the same homo-erotic charge of, say the SA scenes in Visconti’s “The Damned”, there is a slightly disturbing nature to some of the pictures….

Up close and personal

Stove not lit yet!

Later in the pub…

D A Byrne and Jack Haughton