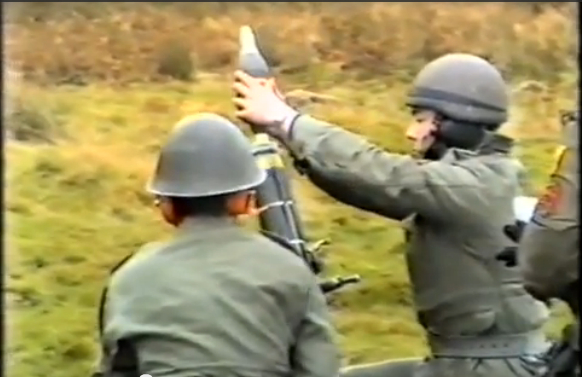 Following training during Annual Camp in Tralee on the support weapons there was a shoot the following October. The video attached here also clears up one of the great controversies of the 21 Bn and I believe vindicates Des Fitzgerald from a vile calumny which I heard repeated last Friday night.

About 20 seconds into the video it is clear that Des actually STOPS a guy putting the bomb into the tube upside down! I heard that Des actually had to leave the country such was the slagging he took over the fact that he was about to fire a mortar bomb upside down. I also heard a name of the number two that Des corrected but his back is to camera and we will leave it unsaid.

Before the shoot the CO was peering through his binoculars at the target zone and enquired of a nearby sergeant “What are those white things out there”. “Rocks I think, Sir”, came the reply. “Well sergeant, I want you to be sure – I have seen too many rocks get up and run away when the first bomb drops”, says the CO.

Ranging rounds were ordered and two fired. “Two bombs away… Two Explosions… and no screams… Sir”. “This is no time to be flippant!”

I am not that sure that the stance of the number one on the first detachment to fire is in the manual for the 81mm, certainly his ending position seems wrong at first glance.