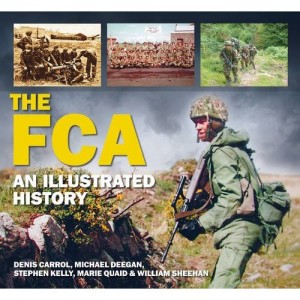 I was talking to Gerry Paley recently and what do you know, but he got the same book for Christmas last year as I did. I am sure the same scenario was played out all over the 21 Bn area. “What will we get Dad, Uncle Gerry, Auntie Suzy for Christmas? Oh look a book about the FCA! Problem solved”. Sure enough on  Christmas morning I threw aside the socks, ties, ointments and settled in for a good read.

The following review is of course only my opinion and should not be taken as a recommendation or otherwise.

The definition of History is given as “a chronological record of significant events (as affecting a nation or institution) often including an explanation of their causes” by Merriam Webster, and as “a continuous, systematic narrative of past events as relating to a particular people, country, period, person, etc., usually written as a chronological account” by Dictionary.com. In my opinion it is difficult to class this book as a history as only one page is devoted to the narrative, indeed it consists of 4 substantive paragraphs and 666 words. I probably wrote more for my essays in primary school including “An old penny tells its story” and “Teach tré thine”. The final paragraph defines the book as a pictorial record which is probably closer the mark.

There has been much discussion on the internet about the seemingly over representation of some units (and consequent under-representation of others) in this work. Some  person with too much time on his hands broke down the percentages by command as South – 42%, East – 32%, West – 7%, Curragh – 5%. I myself had a quick count and of the total photos which have a unit identified (147) there are 22 or 15% of the 23rd Inf and 8 of the 22nd Inf – over 20% between them. There is a grand total of 1 (one) each from 21 Bn and 20 Bn, but some others have been written out of history altogether like members of Stalin’s politburo. Again the internet seems to blame units for not sending in pictures but I would have thought that one does not necessarily self-select for history. 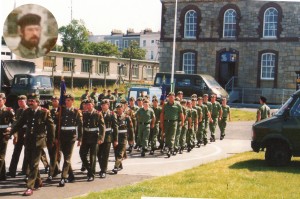 The picture of 21 Bn attracted the following comment on the  irishmilitaryonline.com forum – “actually the 21 Bn picture is frickin’ hilarious. It’s a certain ‘B’ Coy Comdr doing his “Central American Dictator” look at the head of a marching body of his troops :-D”. With all due respect to Brendan Walsh, although he may look like some of the lesser dictators, he does not even come close to Pat Holohan’s version of Fidel Castro seen in early photos.

The book has five authors including holders of a doctorate and a masters. I am simply stating a fact when I note that the biographies of the authors is two-thirds the length of the history.

There is no doubt that many of the pictures are of historical significance. Persons such as Eamonn DeValera,  Sean Lemass, C J Haughey,  Sean T O’Kelly, Liam Cosgrave, and Paddy Hillery are seen inspecting troops. The most interesting historical personage in my opinion is Tom Barry, with the New Ross Battalion in 1954. In keeping with the times that were in them, there is the usual selection of “men in dresses” at various religious events. 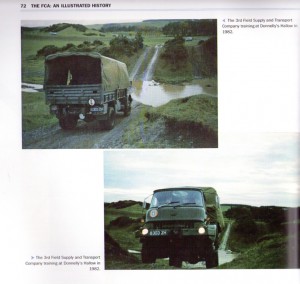 Other pictures, especially of the Landsverk armoured cars, Bren gun carriers and various weaponry are also very interesting. Some picture selections are, in my opinion, bizarre. The 9th Field Artillery include their Christmas Dinner in the 1990s and an Open Air Mass in the 2000s. Although they may be trumped by the 11th Field Engineers 3-legged race on page 60. I also do not see the historical significance of page 72 where we have 2 pictures of the SAME truck driving INTO Donnelly’s Hallow (sic) and then OUT again. At least it came out the same year as it went in.

On Amazon the book gets 5 stars from two 5 out of 5 reviews. I suggest you flick through a copy in your local book store before dropping any hints this Christmas.