Is my memory playing tricks on me or did we actually get green eggs, especially boiled at breakfast time in barracks. Army food is of course one of the great oxymorons, along with “Military Intelligence”. As my father would say, “hunger is a great sauce” and so I was always grateful for the grub when it was served up, either in barracks or on the range. Food on the ranges was served out of dixies and probably made the night before. Even today if I leave a tea-bag too long in the cup the smell of over-strong tea brings me back. Some of you moon-faced young men who read Proust (this article is posted on the birthday of Myles na gCopaleen!)  will remember the same effect on him of the smell of madeleines. 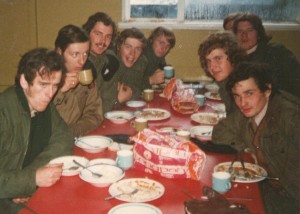 In my memory breakfast always consisted of eggs, bread and butter. Lunch (for most of my life I ate dinner in the middle of the day) was some sort of stew and potatoes, and tea (see what I mean about when we ate dinner) was a class of a fry. In fact the food was so un-healthy that we coined the phrase “Welcome to the Glen of Imaal Cholesterol Festival” for annual camp in later years. Although by the time I had to do a stint as Catering Officer some far-seeing Chief Medical Officer had overhauled the ration and menus to offer a choice of healthy options at each meal time i.e. you could have cereal instead of your eggs for breakfast, or perhaps a vegetarian option at dinner (I knew no good would come of admitting women to An Forsa – but no-one would listen to me).One year at camp in Waterford we were pleasantly surprised to find ourselves treated to cocoa each evening at about 7PM. It transpires that cocoa had always been on the ration, but had perhaps been swapped for other items, or even gone “missing”. Speaking of food going missing one year in Waterford a trail of fresh blood was spotted along the side of the square leading towards the front gate. Fearing that some heinous assault had taken place a party set out to follow the blood trail and rescue the victim. Out the gate they went and followed the trail to Fad Browne’s where some enterprising members of the catering staff were bartering steaks.

Mess extras were always a bone of contention come pay day. Once you had collected your cash there were a series of people sitting at tables (you know who you are) lined up to take it from you. There was the inevitable collection for some old bloke we never heard of or ever got to know who was standing down and had to be bought a present. Of course once we stayed in the unit long enough we had the chance to be that old fellow ourselves and young people who never heard of us would have to contribute to our gifts. Unfortunately like many old soldiers I just faded away once my 21 years were up. But there was always one collection for mess extras even when we were eating in the dining hall. It was explained that this was for items not on the ration such as ketchup and other condiments. It was then that you would recall that on Thursday mysterious bottles of a red substance and salt and pepper had appeared on the tables at meal times and that the GOC was not even visiting that day. The other sure sign that there was a GOC inspection was the sudden appearance of ice cream on the menu. 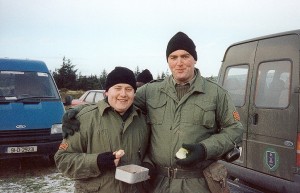 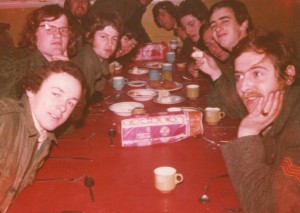 It was during my second camp as an officer, in Tralee, that I saw the abuse that the Catering Officer was handed especially by the members of the Officer’s Mess. He would be seen down the town in Dunnes buying particular brands of marmalade as someone or other would only eat Seville oranges or whatever. I recall that the mess fees were pretty high in the Officers Mess and always caused very heated rows about who ordered prawns etc. I vowed there and then not to put up with that shit if I ever had to be Catering Officer.

On this same camp I was on duty as Orderly Officer. As I was a newish officer I was taking my duties very seriously. One of the duties is to inspect the Dining Hall and sign the menu book. I went along, interrupted the Cook Sergeant as he prepared that day’s culinary delight and got a glare that would have put Gordon Ramsey to shame. He produced a menu book that showed the main dish to be “Liver Lyonnaise”. How very exotic I thought to myself, and having probably seen some movie or other where the officers should taste the food before it was served to the men, I called for eating irons. The cook then took the lid from a giant cauldron and, in all fairness to him, scooped some of the scum from the top of the vat where he was boiling the livers with onions, so I could taste the fare. Only in recent years, with my son now living and working in Lyon, have I understood the Lyonnaise love of offal. In fact when I visit there now, I eat in the bouchons, and savour the cheaper cuts of meat and offal.

The following year I was actually the Catering Officer on camp in the Glen of Imaal. As mentioned above the Catering Officer was usually on a hiding to nothing as everyone likes to complain about food. I do not remember whose idea it actually was, but a masterstroke was perpetrated when we condemned the Officer Mess, and so all meals had to be taken in the Dining Hall. A section of the dining hall was partitioned off and table cloths laid out (these may have been sheets once). Catering staff then did not know when they plated up a meal whether it was going to a G1 recruit or the CO. The standard therefore rose for everyone. I pretty much stayed out the chefs’ way for the week, letting them go to the Curragh and collect rations and barter eggs for meat, or whatever it is they do. I know on some camps in the Glen Catering Officers would head into Newbridge to buy extras in Tesco and Dunnes, but I never did and anyone who complained was told they were in the wrong camp – it was Butlins they wanted.

However the CO did call me over to complain on day 2 that he had been waiting nearly 10 minutes for his soup to be served at lunchtime. I called a meeting with the head of the waiting staff, Towser, and we concocted a plan that as soon as the CO sat down at breakfast a bowl of cereal was put in front of him, at dinner his arse would not hit the chair before a bowl of soup arrived, and all of this whether he wanted them or not! He was so shell-shocked by all this we could then take as long as we liked to get him his main course. 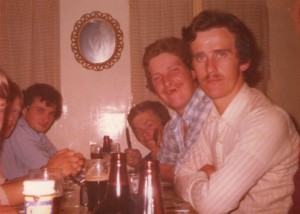 Of course, as much as everyone from the CO down, felt the need to complain about the food, I do not remember any of it ever being handed back and plates were always clean when returned. That is not to say we did not look forward to meals out when we could afford it and fine establishments such as Rockets and The Maryland (subject of a bizarre libel case later in life) spring to mind.